Now and then, there are newspaper articles and news stories about diversity in  aviation and discussions if diversity would improve safety or not. Some of the  arguments against diversity is that the captain of the aircraft should be the best and diversity should not be considered. At the other end, the argument for  diversity is that a diverse team stay stronger against bullies, or the one with the  best vocabulary who wins the deal. The news media portrays these opinions as  opposite ends of a spectrum from safe to unsafe. Sometimes discussions are in  favor of diversity, while other times diversity is unsafe. No matter who wants to  be the safest candidate, both sides are using the safety card. The only reason to  play the safety card is that there is no data to support their statements. Everyone  falls for the safety card and becomes paralyzed in a discussion against safety. The  answer to diversity is not if it is safe or not, but to answer the question of what personal qualities a successful pilot has. The only different between a pilot and  other jobs, is that everyone else do not fall to the ground when taking the wrong  turn at the fork in the road. Learning pilot skills are no special or difficult skills to  learn that only certain pre-selected people can learn. It is a skill anyone can learn  by determination and focus. Diversity in aviation is to recognize people who are  excellent at managing these human behavior skills.

Becoming a successful pilot requires a combination of skills. It is not all  mathematical and technical, but they have to think creatively, act under pressure,  and adopt a mentality fitting for a role of such great responsibility. Pilots not only  require leadership qualities, but they also have to communicate and work well as  part of a team. The aviation industry in general expects that a plot develops  several human behaviors skills to be a successful pilot. These principles are true  for single-pilot operations or as a member of a multi-crew operations. They are  true for recreational, or general aviation an professional or commercial aviation. A  successful pilot communicates with clear communication, not only verbally, but  also behavioral communication. Clear communication closes the gap between  expectations, assumptions and anticipation and those immediate tasks to take  place in the immediate future. Clear communication also closes the gap between these short-term actions and long-term objections, which is to move the aircraft  from one location to another without disruptions, unplanned, or unexpected  events.

A predictive level is different than to foresee the future.   A predictive SMS is about comparing data collected   and results from the past with current data collected to   predict the future. Without making any changes to   human factors system, organizational factors system,   supervision system, or environmental system the   outcome from the past will repeat itself in the future. A   predictive system is not designed, or capable of   predicting a specific event in time (duration), space   (location) and compass (direction), but can predict an   outcome when certain parameters are met. If a person   is  not trained to tow airplanes but expected to park five   airplanes in a hangar that normally holds only four, there is a high probability that at least one airplane will be damaged during one of the towing process. This is predictable, but it is impossible to predict a date and time of the future incident.
A predictive SMS is also quite different from a proactive process. A reactive SMS is to generated corrective actions and implemented to respond to event analysis and to avoid future incidents or accidents. A predictive SMS is opposite to a reactive system in that a predictive level accepts that future incidents or accidents are inevitable. In a reactive system hazards are captured and entered into a hazard register for analysis. After the proactive and hazard register process is completed, the predictive system goes into the hazard register to predict what hazards are next in line to cause an incident or accident. In short, the proactive system placed hazards in the hazard register into boxes so they could no longer cause incidents, or unscheduled events, while the predictive system then removed some hazards and placed them into another box of future known incidents. It is only when an enterprise accepts that incidents are inevitable that incremental safety improvements becomes available as a safety tool.
At fist glance it also appears that the proactive and predictive system opposes each other, since the proactive system is generating corrective actions to ensure that certain incidents do not happen again, while the predictive system makes these same hazards a cause for the next incident. Yes, they are two different systems, but they complement each other.
Remember, a predictive system is not a system with the ability to pinpoint the next incident. After a hazard register is populated and corrective actions plans (CAP) are assigned, a predictive system takes over and monitor the CAP processes. A predictive system is a daily quality control system. Some predictions may be long term, while other predictions are only available short term. If an aircraft is still travelling at 100 KTS when reaching the threshold markings at the other end, a confident prediction is that within the next few seconds the aircraft runs of the runway. If this same airplane is touching down beyond the half-way point of the runway, a runway excursion may be predicted, but it is a prediction with less confidence. At the third event, the aircraft is on approach speed and slope for a touchdown point within the touchdown area. A prediction can be made that this will be a successful landing. All this make sense, but why even bother making such obvious short-term predictions. It is absolutely true that it is nonsense to make these short-term predictions since they do not include processes to affect the outcome. A predictive SMS predicts long term predictions with a high level of confidence of an outcome by monitoring hazards.
From a reactive system point of view each hazard are placed in a box labeled “Corrected Hazards”. What the predictive system does is to pick up one hazard at a time and monitor it. Hazards are monitored daily within a quality control system and analyzed to the level of job performance, or how the job is done. A job performance level is analyzed to four high level factors: Human Factors (HF), Organizational Factors (OF), Supervision Factors (SF) and Environmental Factors (EF). Applying a daily rundown of airport operations tasks, these factors are monitored and recorded. Over time a predictive SMS will paint a picture of each task and if the picture mirrors expectations from the hazard register incidents are bypassed.
In a predictive SMS the four factors are in a mastermind alliance where they are working actively together in perfect harmony toward a common definite objective. This is similar to the S-H-E-L-L model where Software, Hardware, Environment, Liveware (people) and Liveware interact with each other in a robust way. Human Factors, Organizational Factors, Supervision Factors and Environmental Factors in a predictive SMS interact with each other in incremental improvements. A change to one of the factors requires a change to one or more of the other factors. Example: An organization may change their organizational factors to suit a Safety Management System, or a person may learn to recite the alphabet for the first time, but without making changes to supervision factors there are opposing
internal forces acting for and against incremental improvements. A person may learn to recite the alphabet for the first time, but without harmony between HR, OF, SF and EF the opposing forces are destructive to learning.
A predictive SMS detects these opposing internal forces and can with a high level of certainty, or probability, predict that by continuing down the same path without harmony, eventually the bubble will burst, or an incident will happen. When a paired flight crew, captain and first officer, are opposing each other that aircraft is on its way towards an accident. A predictive SMS recognizes and display these forces.
Catalina9
- April 06, 2021 No comments:

Accepting or Rejecting Risks By OffRoadPilots A ccepting or rejecting risks is a fundamental principle in a successful safety management s... 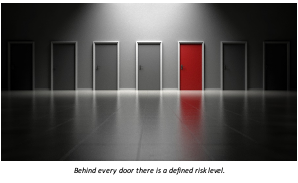