On 15 March, 1960, Santa Claus was on a reconnaissance trip to review his last delivery trip, and verification that he had not forgotten or left someone out this time. Since Santa implemented the SMS (Streamlined Mission Service), he would do a verification trip, or a quality assurance of his deliveries to learn from the past and improve for next deliveries. Since the SMS was implemented, Santa also does triennial travel audits of the operations during the month of March. On this day in March, the reindeers suddenly lost all their flying powers. Santa had been so busy with the quality assurance program and audit preparations that he had forgotten to tell the elves to feed the reindeers that morning, and they ran out of power. This was an embarrassing moment for Santa. He was known all over the world for timely deliveries, safe transportation, except for a few roof-top crashes, and with a unique quality to know what presents people in different areas of the world wants. When the power ran out, all electrical systems also failed, including Rudolph’s red nose landing light. All Santa know at that time was that he was somewhere where it was very cold, very flat and many lakes, so he established a nice three degrees straight in approach into the unknown. 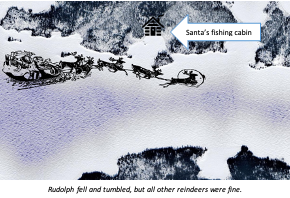 It was a dark night, but Santa had faith in the reindeer autonomous landing system, which was powered by an onboard emergency-elf who generated power by running on a treadmill. Without lights, without a glideslope and without any visible clues on the ground, Santa prepared for the worst. One hazard Santa had identified in his SMS, was that a total power failure was a real probability and gliding to roof-tops without power was implemented in his new training program. It was the SMS Director, Mrs. Santa who discovered in her accident reviews that many of the roof tops incidents were due to lack of power for the hoof-reversals to assist braking a higher speeds. After many glide-approaches, the reindeers became very proficient in hitting their landing spots. But this time it was dak, which they had not experienced before. Santa and Mrs. Santa conducted their no-red-nose power approach scenarios by fist establishing s risk classification number, a risk analysis for a safety risk level, a root cause analysis and at the conclusion, a system analysis of the approach.

Santa could now see the ground, but he had no manual control of the autonomous landing system, so he buckled up the best he could and prepared for a crash landing. The system worked well and commanded the reindeers to flare at exactly the right time and it was a smooth landing. After all the snow was cleared and Santa was looking around, he could see nothing else by snow covered land. He knew he had landed on a lake, and with his extensive knowledge of world geography, he knew exactly what lake it was. It was actually his favourite lakes for summer fishing, and he had been there several times. He had landed in his favorite narrows fishing spot at 466212.95E, 6089107.56N, 48U. Some years earlier a bush pilot flew him in a float plane to this spot, and the pilot did the worst water landing ever. Santa’s friend who came on the fishing trip was a senator and named the landing the Norwegian landing, since he had spent time in the Norwegian Sea with high waves. Santa jumped out of his sleigh and thanked Rudolph and the other reindeers for their smooth landing. After he had looked over the crash site, he got angry and wanted to punish the responsible elf. Luckily, Santa had a direct elf-to-elf telephone and could instantly communicate with Mrs. Santa. When Santa asked her for the name of the responsible elf, she answered that this is not how we run our Streamlined Mission Service (SMS) in a just culture. She also informed Santa that he was the Accountable Elf, and needed to follow the same process as everyone else when conducting root cause analyses. Santa then understood that he could not change a risk level just by the stroke of a pen, but it required hard work.

Santa has struggled with the just culture principles since they implemented SMS. Just culture is a different behavioral concept and must become lasting habits to achieve positive, sustainable change. Generally speaking, there are two types of organizational cultures. The old way is the blame culture, and the new way is the just culture. The old way blame culture is simply to blame the last link in the chain for the occurrence, lack of competency, incompetent to follow procedures and the root cause for the catastrophic evens. A simple old-way example is when a Santa in training was blamed for a crash when both Santa and the Santa trainee were focused on a hoof-down and locked light malfunction, and failed to stay in the air. The blame culture is simple and easy, but human errors or other negatives are not useful for intervention to improve safety. 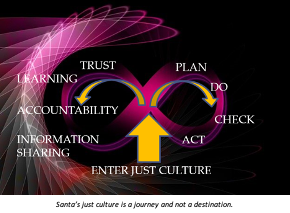 In Santa’s SMS there is a just culture and a place where there is trust, learning, accountability, and information sharing. Santa comprehends the principles that elves nature is to resist changes and that Santa and Mr. Santa must take the very fist step, which starts with an action and not words, text messages or social media shows. A just culture change is to move from known into unknown. Some of the senior elves are in opposition to Santa’s SMS because they do not see their own benefits by changing. There is also uncertainty and insecurity when moving into unknown territories and there is opposition to the way changes to a just culture was presented. Santa’s objective is to instill trust since trust is a key ingredient for a successful change. Trust must be earned, and Santa realized that it cannot be implemented organizational wide supported by any other platform.

o   Without trust there cannot be expectations to perform

o   Organizations conduct training, but an individual can only improve by learning

o   With trust and learning, accountability to tasks becomes possible

o   Without trust, learning and accountability there is no valuable information to be shared

The sun was rising in the East and finally help arrived for Santa. The rescue crew brought food, dry clothes (a used Santa suit) and tools to repair the broken systems. Santa enjoyed the company talked about the old days and all the landing he did over many centuries on the roof of their homes. This was the first time anyone had actually seen Santa and his reindeers. When the repair was done, the snow was cleared off the ice, Santa wanted to do a taxi-run to feel the condition of the ice surface. However, the repair was so well done, that when Santa reach 70 elves-steps per hour, the reindeers lifted off and he was on his way back to the new secret location since the pandemic. 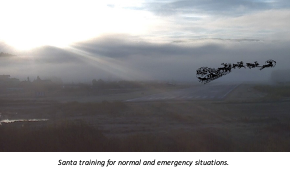 Santa arrived at home and had a long conversation with Mrs. Clause, who is the SMS Manager and elves, including their process coordinator. Santa did a root cause analysis, since the incident was a special cause variation, and his opinion was to site electrical failure as the root cause, since that caused the reindeer autonomous landing system. Mrs. Santa opposed strongly, but Santa demanded he had the right as the Accountable Elf to decide the root cause by the stroke of a pen. When the elves heard about the root cause, one of the elves came forward and admitted that he had forgotten to feed the reindeers and that is the reason they ran out of power. With Mrs. Santa’s support to the elves, they proposed the root cause to be the reindeer feeding system processes itself and 40% contributed by organizational factors, when compared to elves-factors (15%), supervision factors (25%) and environmental factors (20%).

Santa reviewed his observations and was glad that he knew the area without relying on the GPS (Genuine Path for Santa) for travel routes. Over several centuries Santa had travelled the globe and visited every home, child and adult in the world and provided them with gift. There were no such thing as good kids or bad kids when Santa delivered. This year Santa had heard rumors that the GTS folks are changing the route to only include the good kids. However, within a Santa SMS system there is a just culture and he plan to turn off the GPS route, use his personal rout knowledge and visit all the kids in the world.

Several years later Santa’s emergency landing on a remote and cold lake was published in the newspapers. The newspaper story was very different from the actual events and blamed the reindeers for the emergency. When Santa read the story, he smiled and felt good about living in an SMS just culture where issues can be resolved and improved.