The Safety Management System (SMS) Safety Policy is the platform on which the SMS is built. The policy is built on an idea, a vision, and expectations of future achievements. A policy is a course or principle of action adopted or proposed by a government, party, business, or individual. An SMS policy follows these same principles and remains in force until the idea, vision, or expectations changes. It is crucial to the success and integrity of a Safety Management System that the Safety Policy is designed to serve the major definite purpose of an enterprise. There is one quality which one must possess to win, and that is definiteness of purpose, the knowledge of what one wants, and a burning desire to possess it. A major definite purpose is the core purpose for the existence of an organization, and the hub where goals, objectives and processes are developed and designed. The more you think about the purpose of your SMS Policy, and how to achieve it, you begin to attract people, opportunities, ideas, and resources that help you to move more rapidly toward your goal. 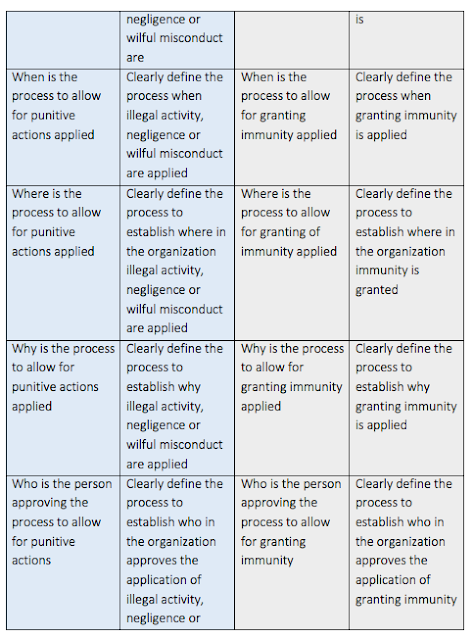 Both scenarios require comprehensive pre-defined and published definitions. A concept of the SMS is to pre-define and clearly spell out job-performance expectations. When job performance expectations are undefined until they reach the level of illegal activity, negligence or wilful misconduct, the line when these levels are reached must be clearly defined. Generally speaking, illegal activity is an act committed in violation of law where the consequence of conviction by a court is punishment, especially where the punishment is a serious one such as imprisonment. A definition of negligence is failure to use reasonable care, resulting in damage or injury to another, and a definition of wilful misconduct any act, omission or failure to act (whether sole, joint or concurrent) by a person that was intended to cause the harmful consequences to the safety or property of another person. In addition to general definitions, each sub definition must be clearly defined. When job performance expectations are defined under which immunity from disciplinary actions will be granted, these expectations must be clearly defined. They are defined as Safety Critical Areas with a subcategory of Safety Critical Functions. A comprehensive list could include more 500 events to consider.
An airport or airline operator must apply the regulatory requirement applicable to their operations. Within a just-culture, or a non-punitive environment, there must be justification for pre-defined actions or reactions. The four principles within a just-culture there is trust, learning, accountability and information sharing. As long as an operator is governed by these principles, they may apply any non-punitive policy tailored to the needs of their operations.
Catalina9
- June 28, 2021 No comments:

There are several guidance materials available on how to do a risk analysis which comes with different designs. A risk analysis may focus on likelihood of a hazard, or it may focus on the severity of a hazard as a determining factor. The combination of likelihood and severity is communicated as a risk level. A risk analysis tool is the risk matrix, which assign a reaction to the risk by colors. Red is normally an unacceptable risk level, while yellow may be acceptable with mitigation and green is acceptable without a reaction to the hazard. In a risk matrix likelihood and severity are assigned classification letters and numbers. A low number could be assigned a high severity or a low severity depending on how the risk matrix is designed. The same is true for the likelihood level where the letter “A” could also be a high severity or a low severity depending on risk matrix design.

What To Expect From An Audit