The Integrity Crisis!
Quality and Safety….Forget it!

Former peanut company executive Stewart Parnell was hit with a virtual life prison term Monday for his 2014 conviction on crimes related to a salmonella outbreak blamed for killing nine and sickening hundreds. Mary Wilkerson, 41, a former quality control manager at the now-defunct peanut firm, drew a five-year prison term for her conviction on obstruction in 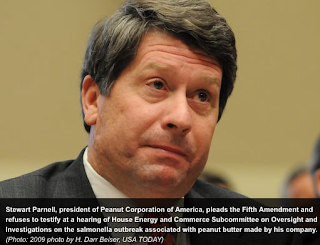 "Honestly, I think the fact that he was prosecuted at all is a victory for consumers," said Bill Marler, a food safety lawyer who represented several of the victims in the PCA outbreak. I had posted an article in my blog back in 2009 when the story originally broke.

It was the deadliest salmonella outbreak in recent years and resulted in one of the largest food recalls in American history -- from Keebler crackers to Famous Amos cookies to the snack packets handed out on airlines.

"Suddenly, one of America's favorite foods had turned into a killer!"

VW and its upscale Audi brand have been ordered to recall nearly 500,000 diesel cars sold in the U.S. According to the EPA, a number of Volkswagen and Audi vehicles equipped with 4-cylinder diesel engines were programmed to detect when they were undergoing emissions tests. Otherwise, the software deactivated some of the onboard pollution control equipment. The process apparently helped improve performance but resulted in the vehicles emitting up to 40 times the allowable levels of additional particulates and smog-causing oxides of nitrogen.

The agency has ordered VW to fix the cars at its own expense but said car owners do not need to take any immediate action. The EPA insisted that the violations do not pose any safety hazard and said the cars remain legal to drive and sell while Volkswagen comes up with a plan to recall and repair them. However, it said the cars posed a threat to public health.

Both of these cases have one thing in common. There are people who KNEW the dangerous quality and safety of their product and consciously made the decision to ignore it putting people’s live at risk!

The BIG question we must struggle with as professionals. Where there is NO integrity,  Is there success? How can an organization have a Safety or Quality system without Integrity? History teaches us that it is impossible. The conscience effort by companies to simply “Risk Rate” situations that can be deadly, must be condemned and those who are responsible punished.

What are the "checks and balances" in an organization that can prevent deadly or immoral decision to be made? In the case of the Peanut Corporation of America, there was a Quality Assurance system that caught the tainted product. It was Management that usurped the Corrective Action and choose to release the known tainted product for profit reasons.

Should Integrity be an essential job requirement for executives and decision makers in companies?